The Real Truth About African Immigration 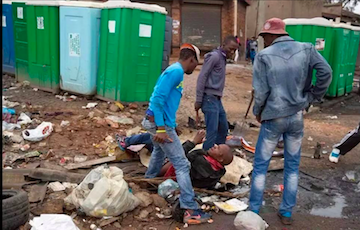 From American Thinker. A former Peace Corps (corpse?) volunteer in Senegal, Karin McQuillan, explains the difference—the VAST difference—between American culture and theirs, and why we should NOT import Africa here.

Read it. It's important, informative and infuriating...considering the Fascist-Left's mad rush to overrun White America with just these sorts of "immigrants."


Albert Schweitzer published his "African Notebook" in 1939. It contained the following passage, excised from subsequent editions:

"I have given my life to try to alleviate the sufferings of Africa. There is something that all white men who have lived here like I must learn and know: that these individuals are a sub-race. They have neither the intellectual, mental, or emotional abilities to equate or to share equally with white men in any function of our civilization. I have given my life to try to bring them the advantages which our civilization must offer, but I have become well aware that we must retain this status: the superior and they the inferior. For whenever a white man seeks to live among them as their equals they will either destroy him or devour him. And they will destroy all of his work. Let white men from anywhere in the world, who
would come to Africa, remember that you must continually retain this status; you the master and they the inferior like children that you would help or teach. Never fraternize with them as equals. Never accept them as your social equals or they will devour you. They will destroy you."

Call me a racist if you will....it doesn't faze me at all, you understand. But there does seem to be some consensus among the intelligent who have experienced Africa first hand.